The Truth About Slavery and African Resistance

Mary Prince in her narrative declared, “All slaves want to be free” and states, “I can tell by myself what other slaves feel, and by what they have told me. The man that says slaves be quite happy in slavery – that they don’t want to be free – that man is either ignorant or a lying person. I never heard a slave say so.”

Mary Prince’s The History of Mary Prince, a West Indian Slave, Related by Herself is the earliest know slave narrative by a woman, which highlights the unjust and inhumane treatment of slaves. It was published in 1831, almost 300 years after the first African slave was transported from the African coast. It is a saga of overwork, abuse and sexual violence that well over 15 million unnamed slaves had experienced during Colonial Slavery.

The practice of slavery existed in many societies, however chattel slavery developed a more brutal and racial character. Tens of millions of innocent Africans were enslaved and transported to perform unfree labor in the Americas, Asia and Europe. The population of Africa soon became the source of cheap labor needed by Europeans to accumulate capital. It is estimated Portugal was responsible for transporting over 4.5 million Africans, not counting the many millions who perished enroute to the Americas. As black historian W.E.B DeBois noted, “It was the rape of a continent seldom if ever paralleled in ancient or modern history”.

Legally owned throughout their lives, black labor created the wealth that made economic growth possible in the US and further developed capitalist production. The slaves went unrewarded for the work they were forced to regularly perform. The product of their labor was not owned by them but by their slaveowners. This surplus labor – unpaid labor – was both the source of wealth for the slave owning class and the industrializing North. South Carolina delegate Rawlin Lowndes said, “Without Negroes, this state would degenerate into one of the most contempible in the union..Negroes are our wealth, our only natural resource”.

The exploitation of black slave labor was the backbone for US economic activity and prosperity. It was essential then for the US state apparatus to “facilitate the expansion and entrenchment of institutional racism in both slave and non-slave holding states”. This was established through the creation of slave codes, laws which defined the status of slaves and the rights of slave owners. The Barbados Slave Code of 1661 served as the basis for the slave codes that would be developed in British North America. South Carolina in 1696 passed a law reducing the status of enslaved Africans to that of chattel property and other colonies soon followed. In 1705 Virginia passed a law stating that only people of African descent can be slaves. Similar to the Virginia laws, Kentucky defined enslaved Blacks as real estate legally speaking, with no civil or human rights. The evolution of slave codes further stripped away any protection enslaved and free blacks would have under the law.

In 1705 Virginia passed a law stating that only people of African descent can be slaves.

The Constitutional Convetion of 1787 was essentially a compromise between the slaveholding class of the South and the monied North. The delegates “chief concern was the the creation of a strong national government that would gurantee property rights – slavery being among them”. The convention delegates agreed on key specifics for the soon to be ratified Constitution.  First, for purposes of electoral represention and taxation slaves were counted as three-fifths of a human being. Second, federal authorities were prohibited from interfering with the slave trade before the year 1808. Lastly, states were obliged to return all fugitive slaves to their rightful owners. The ratification of the US Constitution protected the institution of slavery and wove institutional racism into the fabric of American society. White supremacy trumped Black liberty, as various states established laws prohibiting blacks from voting, leaving the plantation without certification, owning weapons, and gathering with other blacks for more than four hours. Though these laws were installed essentially to protect the institutions for economic and political prosperity, the underlying cause for their creation in most cases were in fact due to African resistance.

Numerous black slave rebellions and insurrections took place during the 17th and 18th centuries. The British experienced more slave rebellions in Jamaica, than in all its Caribbean colonies combined. There is documented evidence of more than 300 uprisings or attempted uprisings in the United States of ten or more slaves. Virginia had 84 documented cases of slave insurrections, twice as many as Louisiana and South Carolina. As early as 1663 black slaves in Gloucester County, Virginia conspired with white indentured servants to revolt but were betrayed by the servants. The New York Slave Revolt of 1712 was the result of enslaved Africans communicating and conspiring with other enslaved Africans and free blacks. On the night of April, 1712 the men set fire to a building and attacked the white colonists as they tried to put out the flame. Their actions left 9 whites dead and new slave codes to be created prohibiting blacks from carrying firearms and gathering in groups of more than three. The Stono Rebellion was a slave rebellion begun on Sunday, September 9, 1739, in the colony of South Carolina. The rebellion started with a group of 20 before recruiting 60 other slaves. Chanting the word “liberty” as they marched, the group burned seven plantations and killed around 20 whites before being suppressed by a South Carolina militia. The rebellion inspired future slave uprisings in South Carolina and prompted officials to enforce stricter slave codes; prohibiting assembly, movement and education of enslaved blacks. The Baptist War, also known as the Great Jamaican Slave Revolt, was an 8 day rebellion of over 60,000 of the country’s 300,000 slave population. Demanding more freedom, the rebellion was put down viciously. Approximately, 200 slaves were killed in battle and 300 were killed in “judicial executions”. And the Western World continues to punish Haiti for being the first and only successful slave revolt. Yet, at each corner slaves defied laws denying them their liberty and continued to learn to read and assemble to plot their freedom.

Inspired by the Haitian Revolution, former slave Denmark Vessey in 1822 plotted with other slaves and free blacks to lead an insurrection to slay plantation owners and seize the city of Charleston before fleeing to Haiti. Arguably though the most famous revolt  in North America was Nat Turner’s slave rebellion of 1831. Slaves in the rebellion killed approximately 60 whites, the highest number of fatalities caused by slave uprisings in the South. Again the natural response of the state apparatus was to further limit the liberty of blacks, both slave and free, by denying the rights to assemble or for education. However, it seems the more so Black liberty was stifled the resistance and struggle for freedom increased. 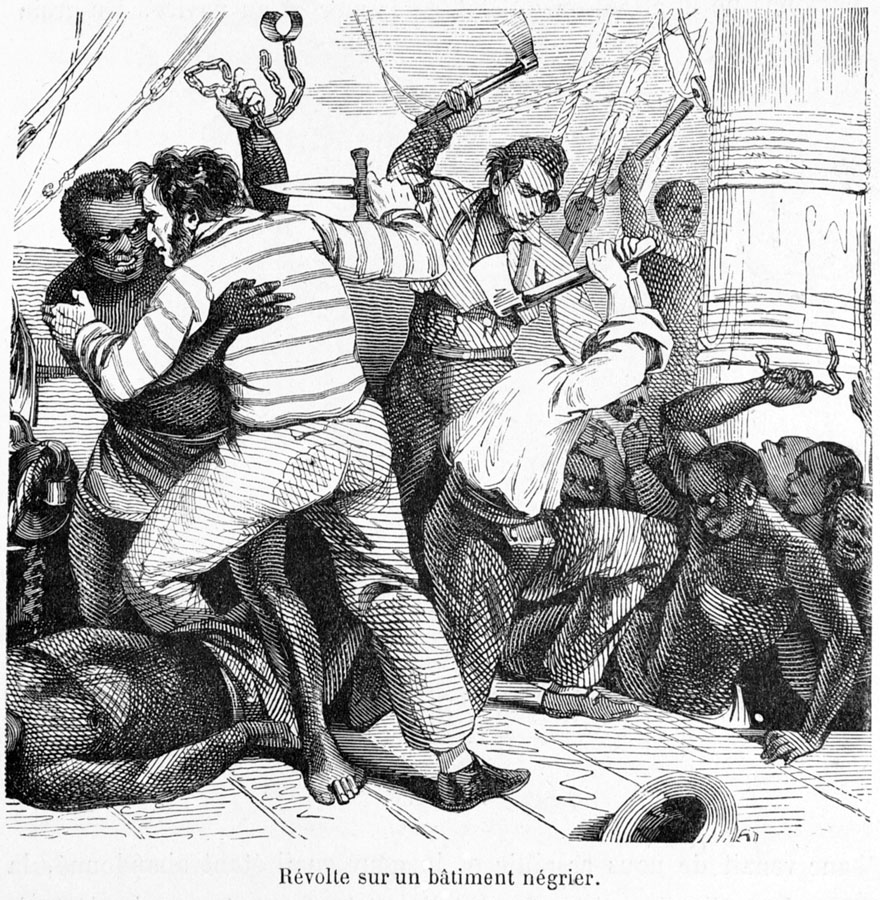 It must be also noted that rebellion often took place even before slaves took foot on foreign soil. Captured Africans often mutinied on board slave trading vessels. In 1765 Africans launched an unsuccessful revolt onboard the Connecticut vessel Hope, killing one crew member and injuring several others before being suppressed. In November of 1841 the 135 Africans on board Creole overpowered it’s crew members and changed the course of destination from New Orleans to the Bahamas where they were declared free. In 1839, Africans, led by Cinque, rebelled and killed the captain and three crewmen. They ordered the crew to sail to Africa but instead the ship was steered the ship along the coast of the US where it was seized by US authorities. In January 1841, the Supreme Court rendered its decision relating to the Amistad affair. The court ruled in favor of the slaves and the Africans were returned to Africa.

Throughout the Americas resistance to slavery and the plantation system took the form of runaway slave communities called maroons, quilombos or mocambos. There were reportedly over 7,000 escaped slaves living in the mountains of Hispaniola. There large maroon settlements in Jamaica that would frequently raid plantations. The frequent attacks led to the First Maroon War. The maroons fought back and forced the British Government to sign a peace treaty.

The most famous runaway slave community of the Americas was Quilombo dos Palmares, a series of Brazilian mocambos founded in the end of the 16th century which survived up until 1694 before being crushed by Portuguese, Indian and white forces.  Palmares was formed when a small group of slaves escaped from their home plantation after a rebellion. They violently turned on their masters before taking to the forrests with supplies and all of their worldly possessions. They ventured over the harsh terrain and settled in a valley that came to be the quilombo at Palmares. What began as a small fugitive camp quickly grew in size and complexity. Estimates place the population of Palmares in the 1690’s at around 10,000 to 20,000 inhabitants. The autonomous region successfully defended the territory while simultaneously performing raids on nearby plantations, freeing slaves, destroying crops and stealing supplies. When the territory was finally captured 200 Palmarista soldiers committed suicide rather than return to bondage. In an effort to demoralize and intimidate Africans, the Palmarista general Zambi was decapitated in a public execution and his head put on display. But instead, quilombos continued to exist in Brazil and lore of Zambi spread, as more fugitive slaves formed settlements in Brazil.

In the United States, at least 50 maroons existed between 1672 and 1864. In the late 1600s large amounts of African slaves fled the British American colonies to Spanish Florida to establish maroons. Establishing an alliance with Seminole Indians, by 1822 it was estimated the maroons of Florida had a population over 800. However, the existence of free and armed black communities was a major concern to American slaveholders. An effort to relocate the Seminole Indians(and possible re-enslavement of Blacks) led to rebellion. The Black Seminole rebellion in Florida evolved into a maroon war that inspired the country’s largest slave rebellion. Eugene Genovese claims the “most impressive slave revolts in the hemisphere proceeded in alliance with maroons or took place in periods in which maroon activity was directly undermining the slave regime or inspiring the slaves by example.” Over 400 slaves rebelled on plantations and fled to join the Seminoles in their pursuit of freedom from US opression.

The Black Experience is different from other ethnic groups in America due to the fact they did not immigrate “in search of Liberty” but were transplanted by force and subsequently denied Liberty. As such, resistance towards domination occurred at the very beginning of the history of Africans in America. As noted, resistance took the form of running away, the establishment of slave communities, sabotage, and “slow downs”. These actions of rebellion , particularly mass flight to the North drained the Southern economy of its human property – the creator of its wealth. DuBois,argued that the massive flight of slaves from the Southern plantations during the Civil War constituted a “general strike” of workers: “This was not merely the desire to stop work,” but “a strike on a wide basis against the conditions of work,” which “directly involved in the end perhaps a half million people.” Thus, the struggle for emancipation displayed by Blacks, both enslaved and free, was a leading cause to the destruction of the institution of slavery.

Do you think African resistance is accurately portrayed in history books or in film? What can be done to change the narrative to be more broader in scope?