The Heist: Macklemore’s Hold on Homosexuality in Hip-Hop

“If I was gay, I would think Hip Hop hates me.” Not quite, Macklemore. People still hate you.

The Grammy backlash is a result of the public’s festering ill feelings towards Macklemore’s positioning in the rap world. Even the Grammy Rap Committee frowned upon the Seattle-based rapper’s pop music infusion in to the category. Macklemore’s popularity stems from his appeal; he raps for fans who don’t really listen to rap. His artistry can pretty much be defined by this one excerpt from the book Decoded where Jay-Z writes “When you watch a children’s show and they’ve got a Muppet rapping about the alphabet, it’s cool, but it’s not really hip-hop” (54).

Herein lays the issue of representation. Macklemore’s status as a white, mainstream pop star bars him from being the voice of rap, while his existence as a heterosexual male bars him from representing another community besides the hip-hop community that he supports; the LGBTQ community. His song “Same Love”—which has become nothing short of a national anthem for same sex marriage—further propelled his career while thrusting him into the age-old discussion of white privilege.

Now, creating a space where men can talk about sexism, where whites can talk about racism and where straight people can talk about homophobia is important. However allowing said groups to speak on behalf of other groups is dangerous, in that it perpetuates neglect; neglect of an already existing voice. In “Same Love”, Macklemore raps, “When everyone else is more comfortable remaining voiceless/ Rather than fighting for humans that have had their rights stolen/ I might not be the same, but that’s not important.” That’s actually extremely important, Macklemore. To reduce the countless failed struggles for civil rights to the conclusion that oppressed groups are “comfortable remaining voiceless” is a slap in the face to an entire movement with members who have been silenced against their will, not by choice. 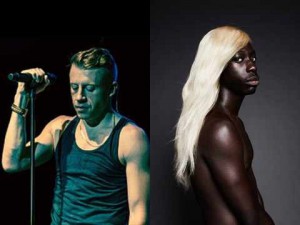 Black and openly gay rapper Le1f tweeted, “it saddens me out that a straight man is the voice pop music has chosen for gay rights.” The New York-based artist criticized Macklemore for profiting off the creation of a gay rights anthem without thoroughly addressing the heteronormative constrains of the music industry that have allowed for his song and not a gay rapper’s song to be accepted. Le1f ranted on Twitter alluding to his song “Wut” when he tweeted, “that time that straight white dude ripped off my song then made a video about gay interracial love and made a million dollars”, and “news just in: gay people don’t care about your video about gay people.”

The lack of queer representation in Hip Hop and the selective public acceptance should not overshadow the fact that there have been rappers before Macklemore who don’t have a Billboard topping gay rights anthem that teeny boppers in Middle America can sing along to in the car with their parents, but who still openly support gay marriage. Granted, the hip-hop community does not have the greatest reputation when it comes to homophobia. However, rebuking the entire community to that of a virulently homophobic group is reductive. Prominent rappers such as Kanye West, 50 Cent, A$AP Rocky, Queen Latifah, and Lil B who all support same sex marriage.

In “Deviance as Resistance: A New Research Agenda for the Study of Black Politics” author Cathy J. Cohen delves into the flawed homogenized study of which queer representation has fallen under. She writes, “Disappointingly, left largely unexplored has been the role of race and one’s relationship to dominant power in constructing the range of public and private possibilities for such fundamental concepts…So while we can talk of the heterosexual and the queer, these labels/categories tell us very little about the differences in the relative power of, for example, middle-class White gay men and poor heterosexual Black women and men” (29). Here, addressing race is critical in assessing issues regarding sexual orientation.  Despite the fact that there are openly queer and transgender rappers in the industry such as Le1f, Nicki Minaj, Azealia Banks, Mykki Blanco, Cakes Da Killa, and Zebra Katz, it took a white, heterosexual male for mainstream society to recognize gay acceptance in hip-hop.

Macklemore seems to be that one special snowflake in the sky that everyone gazes up to. He is not the first rapper to support gay rights. But because these other artists choose not to recreate modern-day queer kumbaya radio bangers, their statements, for the most part, go unnoticed. The queer representation within the rap world is present. Rapper Angel Haze openly identifies as pansexual while others rappers like Azealia Banks and Nicki Minaj identify as bisexual. In 2011 Minaj was asked when she thinks the U.S. will see its first gay rapper. She exclaimed, “I’m a gay rapper!” Azealia Banks also addressed the issue of homosexual representation in hip hop by saying, “I’m not trying to be like the bisexual, lesbian rapper. I don’t live on other people’s terms.” Their nonchalant yet stern positioning of sexuality often is a response to the complexity of tokenization vs. inclusion of homosexuality within the rap industry.

In a Mother Jones interview in August, rapper Talib Kweli said, “There just needs to be a gay rapper—he doesn’t have to be flamboyant, just a rapper who identifies as gay—who’s better than everybody.” Hip-hop doesn’t want to hear Macklemore speak for gays. Hip-hop wants gays to speak for gays.  That’s not to say that Macklemore is wrong for supporting equality among genders and races. That’s great. The issue lies within the fibers of white heterosexual male privilege, in that the same opinion being voiced by countless minorities and homosexuals is not receiving the same degree of attention and accolades that Macklemore is receiving from one song. With whiteness and with heteronormativity comes visibility, acknowledgement, acceptance, reverence. Macklemore isn’t to blame for this societal ill. If the music industry were a game of chess, he’d just be a white pawn moving forward on the board.

Do you think Macklemore’s Grammy nominations and wins were much deserved? How much does race, if any, plays into the success of Macklemore’s career?