If it didn’t happen to African girls, would it be the world’s biggest story?

Two-hundred and thirty four teenage girls were abducted from the Government Girls Secondary School in the northeastern town of Chibok, Nigeria. Gunmen from the Islamist militant group, Boko Haram raided the secondary school the night of April 14th, packing the students onto trucks headed to a remote area along the border of Cameroon. Members of the forest community reported the group to having conducted mass marriages, sharing out the students as wives–though many fear they will essentially be held as sex slaves. Each girl was sold off to a Boko Haram militant for 2,000 naira— $12.

Boko Haram is now deemed the main security threat to Africa’s most populous nation. The abduction occurred the same day a bombing–also lead by the militants–in Abuja, the country’s capital left 75 people dead. According to Amnesty International reports, Boko Haram has killed at least 2,300 people since the year 2010. These attacks are not new for locals. Though the abduction and the bombing are but two of the many atrocities of a five-year-old Islamist insurgency in the northern region, the brutality of the abduction has come as a shock to Nigerians. 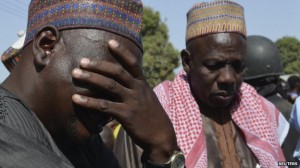 The U.S. government’s assistance in helping Nigeria was marked by the allocation of $20 million in security aid in 2012 to strengthen the country’s military, enhance the government’s forensic facilities, and promote investigation on terrorist attacks. State Department spokeswoman Marie Harf was also quoted as saying, “We have been engaged with the Nigerian government in discussions on what we might do to help support their efforts to find and free these young women.”

With all these concerns, talks of foreign aid and discussions involved in the girls’ rescue efforts, why no extensive media coverage? Why isn’t the abduction of 234 school girls the biggest story in the world?

As of May 4th, the United Nations Women’s Twitter account has only seven tweets dedicated to the missing Nigerian schoolgirls. As of May 2nd, MSNBC has a total of four stories on their website regarding the girls’ abduction. As of May 4th, on CNN’s website a search entry for “mh370 plane” yields 192 results, while a search for “missing Nigerian girls” yields a mere 39. On a list of the 15 top stories on CNN’s website, searched May 2nd, not one story appears in relation to the 234 abducted Nigerian girls. A story on the missing plane appears twice on the list at the number three and the number nine spot. The list also includes stories on the Ukraine, Obamacare, and “The Walking Dead” and “How I Met Your Mother” finales. If those were the most read stories, do Americans just not care? The story of the abducted girls has not gone completely unnoticed, but instead has been muffled by the echoes of other stories, to the point where the media’s silence rings louder than any siren. It’s almost deafening.

What else was being covered instead?

It’s been a tumultuous two weeks–with NBA Clippers owner Donald Sterling’s racist rant, the South Korean Sewol ferry sinking, continued coverage on the Ukrainian/Russian crisis, and a plane. The MH370 missing plane mystery still manages to be stronghold for major news outlets’ attention, harboring 2 consecutive months of coverage. While little black girls like Relisha Rudd, who was kidnapped from a shelter in Washington D.C., go missing and relatively unnoticed by top news outlets. Though Rudd is still missing, CNN’s last story on her case was posted an entire month ago. Relisha wasn’t being covered–and that’s just one black girl. Now 234?

Unpacking the context of the abduction would aid in a possible reasoning as to why it has received relatively less attention than other stories in the news.

Is this an issue of xenophobia?
Some attribute the lack of attention in America by dismissing the abduction as simply international news. There is a dormant, underlying fear of the unknown when it comes to foreign places–especially Africa.Would it be easier for Americans to commiserate with faces that look like theirs or names that sound like theirs? It is as if Americans are distancing themselves from global issues that parallel internal ones because of geographic and cultural differences. Except of course when it’s a Korean ferry or a Malaysian plane.

Is this an issue of gender?
Former American President Jimmy Carter once said, “The abuse of women and girls is the most pervasive and unaddressed human rights violation on earth.” Abduction, sex trafficking, and violence against women and girls in general are issues that transcend national borders, having plagued countries around the world for centuries. It is something the world has grown accustomed to hearing about, but should not be complacent with. But an equally tragic attack was made against Nigerian boys. Boko Haram’s killing of schoolboys in February went largely unnoticed as well. The group attacked a dormitory in Yobe, slitting throats, hacking, and shooting 30 boys dead, and that story wasn’t under major news radar either. 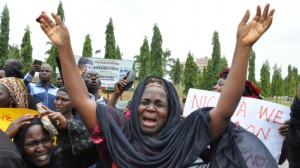 So is this an issue of race?
What if the girls were white? The nation would not rest with the story of Alabama cheerleader, Natalee Holloway, whose disappearance caused a media sensation for almost half a decade. Child pageant star, JonBenét Ramsey’s abduction and murder was met with extensive media coverage that transformed her into a household name. Out of the 234 Nigerian girls gone missing, how many can you name?

It’s one thing to fear your life being threatened, and it’s another to fear your story being left untold. That fear should be eradicated from the minds of women and girls no matter where they are from. The online community transformed into reporters overnight. Social media became the news. The hashtags #BringBackOurGirls #BringBackOurDaughters and #234WhiteGirls were created to put pressure on the Nigerian government for more effort in the search, and the American news to push the same extensive coverage that Holloway, Ramsey, and the plane received. 234 Nigerian girls are deserving of the same media coverage 234 white girls, would receive. One group isn’t more valuable or more newsworthy than the other, but to still know that Natalee Holloway cheered for her school team and not even know one narrative of the abducted Nigerian girls fosters an unsettling air of unfairness and injustice. 234 missing Nigerian girls isn’t merely “international news”. It is a crime against humanity that affects us all.

The Christian Association of Nigeria has released a list of prospective names of 180 of the remaining missing girls. Will we learn them? Will we hear American newscasters attempt to pronounce each one in a foreign tongue and speak of them for the next coming years? Or will we read them once and forget them?

The complexities of media representation of the black community come into play with the pleading for media coverage of black stories; images of ourselves on the screen even when they are tragic, violent, heartbreaking images involving children that one would hope to never witness, we are still begging to see.

The duty to report and keep the ball rolling on critical stories like this is a heavy load on the backs of the concerned. We shouldn’t have to force media outlets and government officials to pay attention to something so huge and tragic. The internet community shouldn’t have to shake up the world because of this. The world should already be shook.

Major news outlets should report with the sentiments and vigor to transcend the limits of geography, race, gender, religion, or any other constraints inhibiting the telling of their stories until all 234 children are home. These are 234 names, 234 bodies, 234 identities, 234 personalities, 234 voices. This number will be etched into history. This number should be indelibly sketched into our minds until all 234 are at peace.

Work with the Obama administration and the Nigerian government to bring home the girls kidnapped by Boko Haram. Sign these petitions: